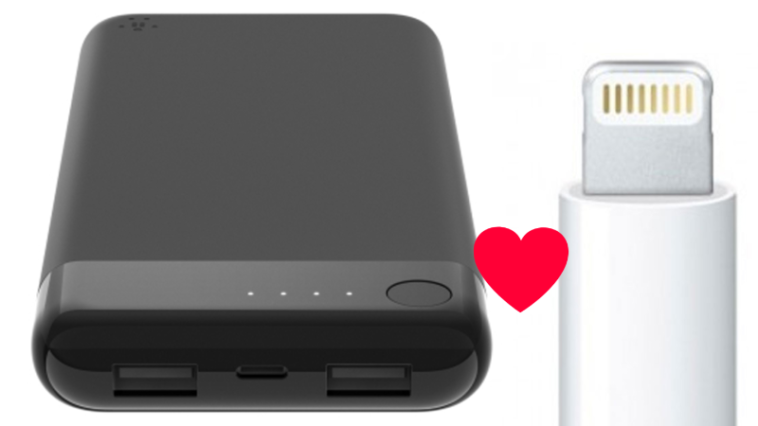 Belkin has become the first company to receive Apple’s approval to manufacture a Lightning connector accessory. The company’s latest battery pack called the “BoostCharge Power Bank 10K” is a portable charger that itself is rechargeable via Apple’s proprietary Lightning cable technology.

This opportunity has been available to accessory manufacturers since November 2014 when Apple first unveiled the new connector during its MFi Summit. MFi, an acronym which stands for “Made-for-iPhone/iPad”, is a licensing program that affords participants privileged access to Apple’s tools, documentation, and support. Before a third-party device receives the stamp of approval, it’s thoroughly tested by the company. The nearly four-year gap between the official release and the first approved third-party implementation suggests that it’s a very rigorous testing and certification process.

Currently, there exists plenty of portable battery packs that’ll recharge iPhones / iPads, however, such devices typically use MicroUSB or USB-C to power themselves. The BoostCharge Power Bank eliminates the inconvenience of extra cables as your Lightning cable will charge your iPhone as well as the battery pack.

As pointed out by The Verge, the problem with Belkin’s latest device is the price point. At $59.99, it’s nearly twice as expensive as other options without necessarily providing twice the capability. Belkin’s charger features one 2.4 amp USB Type-A port, one 1 amp USB Type-A port, and a 10,000mAh battery cell – nothing out of the ordinary as far as battery packs go.

Essentially, it’s up to the customer to decide if carrying only one cable is worth the extra money. Since Belkin presently is the only company to have Apple’s cosign in this area, they essentially have a monopoly. Presumably, as more devices get Apple’s approval, the monopoly will weaken and force the company to lower prices accordingly. Observing this situation play out will no doubt be compelling as USB-C continues to prove itself to be superior in terms of ubiquity and overall speed (when used in the context of USB 3.1).

Interestingly, this news comes a few months after Foxconn, the Taiwanese contract manufacturing giant, announced its intention to acquire Belkin for $866 million.