Gamora doesn’t have the best of times in Avengers: Infinity War.

In fact, it’s fair to say that she doesn’t have a very good time at all. She gets captured by Thanos, then is (*major spoiler alert and without any shadow of doubt your last warning too*) thrown off a cliff as a sacrifice so he can get the soul stone.

In between that, she tries to prevent Thanos from getting the stone by attempting to stab herself.

As she does this, Thanos turns her weapon into bubbles using the reality stone. It’s all quite abstract and left us wondering ‘why bubbles?’

Some suggestions regarding this think that it is a throwback to the hit 2000 video game, Marvel vs. Capcom 2: New Age of Heroes.

This game sees Thanos as a selectable player and when his attacks end, bubbles rise up out of him.

Surely these are too random not to be connected? 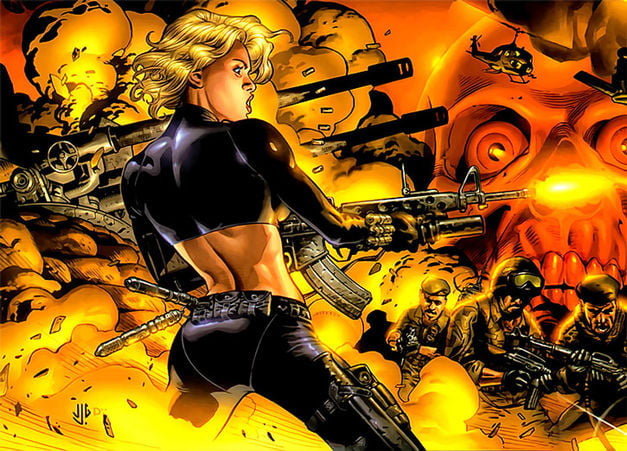 Captain America wasn’t the only one whose image was one of the Infinity War Easter eggs.

Black Widow had a serious look change too. Natasha Romanoff’s infamous red hair is now just a memory – Black Widow was sporting a short blonde bob for this instalment from Marvel.

This could have been a nod to the other Black Widow; the lesser known Yelena Belova, who hair was always styled in a similar fashion to Nat’s in Infinity War.

Belova was part of the Marvel Knights and first appeared in the late 90s.

The head of Marvel Studios, Kevin Feige, had previously stated that there have been talks about the potential of a movie based on The Eternals.

That being said, none of the characters had ever gotten a mention in the Avengers.

That was, until Infinity War. Prior to the scene where Thanos throws Gamora to her fate. In that scene, Red Skull calls the big purple guy, ‘Thanos, son of A’lars.”

As those of you familiar with The Eternals will know, A’lars is also known as Mentor and is a member of the group.