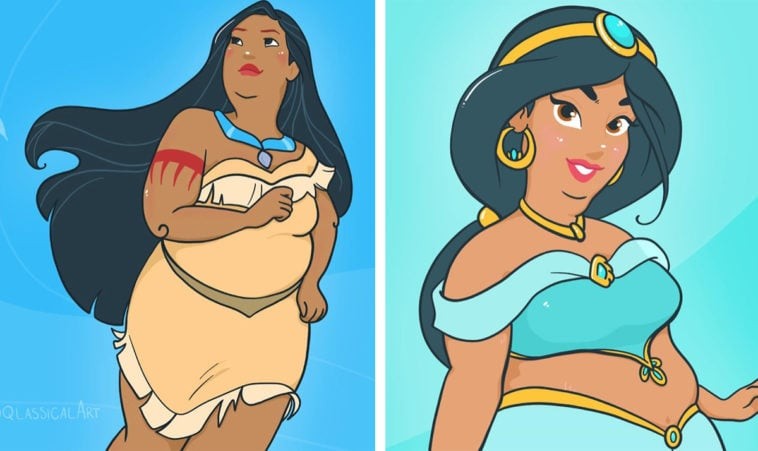 Though four young women of color — Pocahontas, Moana, Tiana and Mulan — have been added to the official Disney Princess line since Jasmine’s introduction in 1992, Disney has yet to create a plus-size princess that fans of the same size can relate and look up to. To fill that void, artist Crystal Walter reimagined what Disney Princesses would look like if they were bigger, rounder, and chubbier. With an aim to make fans realize that their worth as a person has nothing to do with their body size, Walter made sure that her illustrations are filled with themes of body positivity and self-love. Check out some of Walters’ inspiring works in the slideshow below, which also includes similar illustrations created by artist Elena Provolovich for the U.K.-based cosmetic beauty clinic Dr Aesthetica.

Though plumper in size, this version of Alice has the same curious eyes as the original ― a reminder that your body shape and weight shouldn’t stop you from asking, wondering, and embarking on a new  adventure to discover what’s out there.

At peace with her rounder figure, Anna goes out to pick some flowers and enjoy the sun in her beautiful summer dress from the 2015 short film Frozen Fever.

Walter recreated one of the most iconic shots from the 1989 animated classic The Little Mermaid. But instead of illustrating Ariel in her original tiny appearance, Walter decided to draw a rounder version of the Princess of Atlantica to point out the fact that “people exist in fat bodies and deserve to see themselves represented.”

Looking genuinely happy, this plus-size version of Ariel emerges from the water in her glittering blue “victory dress” ― a satisfying sight that proves that fancy outfits are not only for people with slim and sexy bodies.

Ariel’s rounder appearance doesn’t stop her from having fun with her best friend Flounder. While mermaids like her are typically portrayed as skinny in films and on TV series, Walter thinks that fat mermaids make more sense than slender ones. Since body heat is lost more readily in the water, blubber serves as an insulating layer that protects underwater creatures from hypothermia.

Love knows no size. As seen in this adorable artwork, Prince Eric is clearly in love with Ariel despite her chubby figure. While some may say that a handsome prince like Eric can easily find a sexier woman than Ariel, the way he looks into her eyes tells us that he’s already found the love of his life.

Ever wondered what Ariel and Ursula would look like if they swapped bodies? Well, wonder no more, as Walter did just that in this amusing artwork. Ariel remains gorgeous and bubbly despite being transformed into a plump cecaelia. Ursula, meanwhile, still looks cunning and vengeful in spite of getting a slim mermaid figure.

Aurora makes a twirl on the dance hall not only to flaunt her stunning blue dress but also to show off her beautiful voluptuous body.  If Prince Phillip witnessed that lovely twirl, then chances are he’s already on his way to ask Aurora for a dance.

This plus-size version of Aurora is so confident in her body that she doesn’t mind showing off her fat arms and wide shoulders in her gold off-the-shoulder ball gown.

Belle’s heavy weight isn’t stopping her from getting the books she’d love to read from the top shelf. With the help of a library ladder and a basket slung over her shoulder, Belle tries to get hold of those published works while apparently breaking into a song.

Cinderella wastes no time in getting Prince Charming’s attention the moment she arrived at the royal ball. Dressed in her sparkly silvery-blue gown, the plus-size princess made her loveliest twirl on the dance hall floor, hoping that it would catch the interest of the man she adores.

This fuller version of Cinderella can’t help but admire her own looks after seeing her reflection on a bubble. Wearing her scullery maid outfit, Cinderella appears to try different poses to find out her best angle.

Jasmine’s chubby cheeks are blushing in this fan art that depicts her as a plus-size royalty. Dressed in her iconic light blue cropped top that reveals her squishy belly, the Princess of Agrabah probably gets a glimpse of Aladdin smiling back at her.

Jasmine flaunts her pear-shaped body in a sultry red outfit comprised of red harem pants and a matching bandeau bikini top. Though her two-piece attire exposes her belly stretch marks, the Princess of Agrabah is too comfortable in her own body to care about what other people would say.

Megara loves her flabby body, so if you’re planning to look down on her figure, let her cunning stare remind you that she’s someone who never backs down in a fight.

Merida is chubby and happy in this fan art that portrays her as body-positive princess. With her bow slung over her plump body and a quiver wrapped around her wide waist, the Princess of DunBroch looks pleasantly surprised. What do you think is the reason behind her sweet smile?

Moana may have gained some extra weight but that doesn’t stop her from doing the things she loves. With a burning passion for sea sailing, the chiefess of Motonui appears to be honing her boat steering skills by doing some exercise with her trusty oar.

Like this plus-size Mulan, you can also bring honor to your family regardless of how big or small your body is. Though she appears meek and shy in this particular artwork, fans who have watched her titular films know that she’s actually a brave and strong-willed woman who can sacrifice anything for her loved ones.

This fan art featuring a running plus-size Pocahontas is a necessary reminder that fat people move. Though they are rarely seen doing physical activities in public and in the media, it’s wrong to assume that they are not physically active. The sad truth is a lot of them choose to exercise in private to avoid being shamed.

This extra-thick version of Pocahontas challenges the notion that fat people are weak. As seen in this lovely fan art, Pocahontas manages to reach the edge of a cliff despite her heavy weight. Her striking final pose also seems to suggest that she’s flexible in spite of having shapely thighs, legs, and arms.

#22 Snow White and The Prince

Science says happy couples gain weight together, so if Disney couples were portrayed realistically, then this is what Snow White and The Prince would look like. While this version of the pair is chubbier than the original, there’s no denying that they look more blissful than ever.

Tiana looks magically beautiful in her iconic blue gown with a ribbon sash belt that highlights her bulging belly. Having successfully opened her own restaurant, plus-size Tiana is a testament that anyone can achieve their dreams no matter what your body measurements are.

This fan art featuring a curvy Tinker Bell shows that fat people can be sassy as well. Wearing her iconic light green strapless dress with a miniskirt, the winged fairy strikes a cheeky pose that give emphasis to her flabby arms, ample thighs, and bulging belly.

This artwork features all the plus-size versions of Disney Princesses ― both official and unofficial members ― that Walter has illustrated so far. While it’s already satisfying nice to see them all together, imagine how thrilled fat Disney fans would be if at least one of these body-positive princesses actually made it to the big screen.

Since the 1997 film Anastasia was produced by Fox Animation Studios, the titular character isn’t actually a Disney character. But after Disney acquired 21st Century Fox in 2019, the grand duchess of Russia is now a legitimate Disney character. Whether or not people consider Anastasia as a Disney royalty, the fact that a lot of young girls look up to her will never change. So, to make Anastasia more relatable to plus-size kids, Walter reimagined her as body-positive duchess with huge arms, ample breasts, and rounded belly.

Fans look up to Jessica Rabbit’s compassionate personality, but her curvy and slender hourglass figure alienates some people. To make her more relatable to the plus-size audience, Walter makes a fat version of the character without taking away her sultry and alluring persona.

Aside from Disney Princesses, kids nowadays also think highly of superheroes. Sadly, Marvel and DC have yet to bring a fat superhero to the big screen to represent fans of the same size. So, while fans wait for that time to come, Walter tried to fill that void by creating a plus-size, body-positive version of Gal Gadot’s Wonder Woman.

This plus-size version of Ariel looks super comfy in her lilac tie-front shirt and green body-hugging jeans that highlight her voluptuous figure. Though her top bares a portion of her tummy, Ariel, based on her confident smile, doesn’t seem to care at all.

Holding a book in her left hand, Belle is still a bibliophile in this modern-day reimagining of the character. This version of the Disney princess, however, has a larger body size with wide hips and round butt.

This chubby version of Elsa knows a thing or two about fashion, as the character appears to have purposely worn a dress with diagonal lines to help her look slimmer.

Looking like a professional plus-size model, this modern-day version of Pocahontas confidently shows off her curvaceous body in a mustard spaghetti strap top and a pair of tight-fitting black jeans.

This version of Tiana seems plumper and stouter compared to the character’s physical appearance in the 2009 animated movie The Princess and the Frog. But Tiana’s self-assured look in the artwork suggests that she feels good about her body, no matter what its proportions are.

Unlike his slender and muscular built in the 1995 animated classic Pocahontas, this modern-day version of John Smith is rocking a dad bod. And based on how he carries himself, it looks like he’s very proud of it.

In the 1991 animated feature Beauty and the Beast, Gaston has an extremely muscular upper body with an unrealistic small waist. So, to make an authentic modern-day illustration of the villain, Provolovich toned down the character’s over-the-top athletic build to match today’s typical body proportion of a man.

Wearing a loose-fitting cami strap jumpsuit, this modern-day reimagining of Mulan has a toned muscular built. And though her jumpsuit’s semi-plunging neckline highlights her flat-chestedness, the fierce-looking woman seems pretty cool about it.